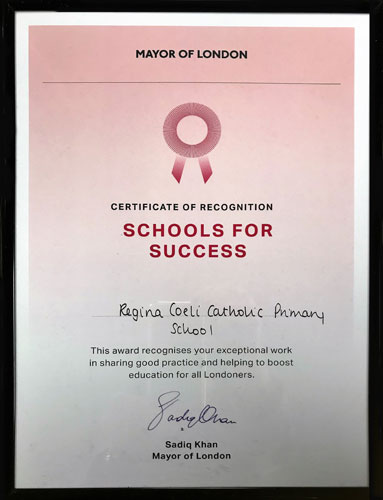 Regina Coeli in Croydon has been celebrated under a new programme set up by the Mayor of London, Sadiq Khan, to recognise exceptional schools in the capital. Schools for Success is part of the Mayor's drive to help tackle education inequality and increase standards for all schoolchildren across the capital, whatever their background.

Schools for Success celebrates schools that are achieving academic success with all their pupils, in particular disadvantaged or vulnerable students who started off behind their peers, or those affected by circumstances that could have an impact on their learning. In 2016 there were more than 39,000 pupils at the end of primary school[i] and 30,000 at the end of secondary school[ii] who did not reach expected levels.

The new programme creates a network for these schools to share best practice with others across London through events, school visits and online profiles. More than 100 eligible schools are invited to join the programme, with 27 boroughs represented at this year’s Awards. This cohort, refreshed annually, represents approximately six per cent of the capital’s schools.

London’s schools are outperforming the rest of the country with last year’s GCSE results showing the city as the top English region for the ninth consecutive year.[iii]

‘Regina Coeli has been recognised in the Schools for Success Awards, because we have used assessment information effectively to provide challenge for all our pupils and this led to accelerated learning and progress in the top 10% of schools.’ - Frances Hawkes Executive Headteacher

The Mayor of London, Sadiq Khan, said: "Congratulations to Regina Coeli Primary School for its outstanding achievements and for the hard work of its pupils and teaching staff. London has some of the best schools in the country, and Schools for Success shows the huge difference good quality teaching can make to pupils who started off behind in their studies. By sharing best practice with other schools across the capital, we can help every young Londoner reach their full potential, and ensure no child is left behind."

102 schools have been recognised in Schools for Success, the first year of the scheme. They are being asked to share their good practice through seminars and hosting visits to their school so that other schools can learn from their successful approaches.